Recent News
Home » News » What Is a Passive Optical Network?

What Is a Passive Optical Network?

A passive optical network (PON) is a fiber-optic network utilizing a point-to-multipoint topology and optical splitters to deliver data from a single transmission point to multiple user endpoints. Passive, in this context, refers to the unpowered condition of the fiber and splitting/combining components.

In contrast to an active optical network, electrical power is only required at the send and receive points, making a PON inherently efficient from an operation cost standpoint. Passive optical networks are used to simultaneously transmit signals in both the upstream and downstream directions to and from the user endpoints. 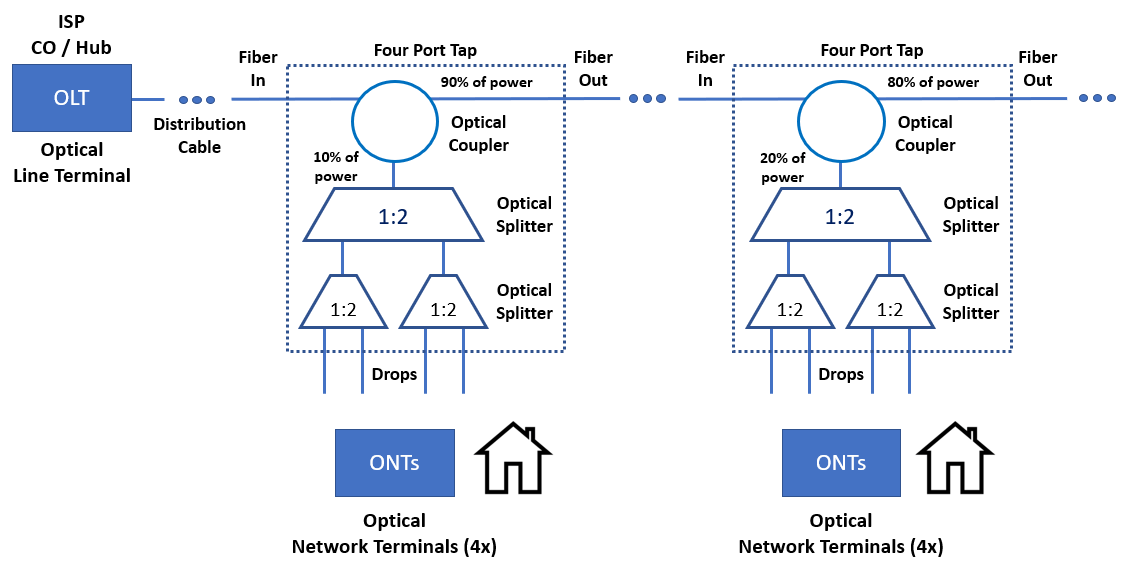 Passive Optical Network Components and Devices
The optical fiber and splitters are the truly “passive” building blocks of the PON, with no electrical powering required. Optical splitters are not wavelength selective and simply divide any optical wavelengths in the downstream direction, of course splitting of an optical signal does incur a power loss which depends on the number of ways a signal is split. Splitters require none of the cooling or other ongoing maintenance inherent to active network components (such as optical amplifiers) and can last for decades if left undisturbed. In addition to the passive components, active end devices are required to fully create the PON network.

The optical line terminal (OLT) is the starting point for the passive optical network. It is connected to a core switch through Ethernet pluggables. The primary function of the OLT is to convert, frame and transmit signals for the PON network and to coordinate the optical network terminal (ONT) multiplexing for the shared upstream transmission. You may also see the end-user devices referred to as optical network unit (ONU), this is simply a difference in terminology between the two main standards bodies, the ITU-T who use ONT and the IEEE who use ONU, the two terms are effectively interchangeable but depend on the PON service and standard being utilized (see below).

The ONT is the powered device of the passive optical network system at the opposite (user) end of the network and includes Ethernet ports for in home device or network connectivity.

The past and future of Copper cable communication technology
2022.01.19
DSL (Digital Subscriber Line) is a combination of transmission technologies with copper telephone lines as transmission media, including HDSL, SDSL, VDSL, ADSL and RADSL, generally called xDSL. Their main differences are reflected in the differenc...

OTDR or Light Source Power Meters?
2022.01.19
What’s Your Best Bet for Link Loss Measurement Uncertainties? Optical time-domain reflectometers (OTDRs) are widely used to characterize elements on a fiber link, such as connectors and splices, because they can measure attenuation (signal loss), ...

What Is a Passive Optical Network?
2022.01.19
A passive optical network (PON) is a fiber-optic network utilizing a point-to-multipoint topology and optical splitters to deliver data from a single transmission point to multiple user endpoints. Passive, in this context, refers to the unpowered ...